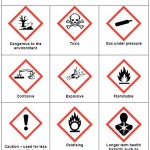 From this month, another phase of the EU Classification Labelling and Packaging of Substances and Mixtures Regulation (CLP) starts. All chemicals created from June must be packaged with the new red diamond cautioning signs Outlined on the accompanying pages.

For chemical blends, which will be the normal shape in which chemicals land at most working environments, new creation runs should likewise bear the CLP labels, however suppliers are permitted to exhaust existing stocks with the old hazard notices in orange squares until 2017.

Numerous manufactures have acquired the due dates and started utilizing the new labels in 2010 when all new load of single substances needed to start conveying the CLP labels — which bring Europe in line with the United Nations’ globally harmonised system for classifying and labelling chemicals.

The new framework, which likewise influences safety data sheets (SDSs) and different parts of chemicals hazard labelling, holds a significant number of the pictograms used to to signal types of hazard in the old system which followed the Chemicals (Hazard Information and Packaging for Supply) Regulations 2009 (CHIP, or all the more correctly, CHIP 4). These regulations have additionally been withdrawn for the current month.

An expression of caution

The new signs may be accompanied by one of two qualifiers:

Danger: for the most hazardous substances and mixtures

“One new sign and pictogram is that for ‘Contains gases under pressure’ — the gas cylinder image resembles a wine bottle or cricket bat. This is a new category under CLP”

Beside the hazard diamond and pictogram and under the qualifying word, many CLP labels carry hazard statements, which replace the old risk phrases. So for respiratory sensitises, such as isocyanates or platinum salts, the statement “May cause allergy or asthma symptoms or breathing difficulties if inhaled” replaces the briefer but more technical phrase “May cause sensitisation by inhalation”.

Instead of old safety phrases, labels should now carry one or more of a prescribed set of precautionary statements.

These phrases are divided into three categories:

One new sign and pictogram is that for “Contains gases under pressure” – the gas cylinder image, resembling a wine bottle or a cricket bat. This is a new category under CPL with four sub-groups for compressed, liquefied, refrigerated liquefied and dissolved gases.

The first three of these have their own hazard statement: “Contains gas under pressure; may explode if heated. “Refrigerated liquefied gases are associated with the phrase “contains refrigerated gas: may cause cryogenic burns or injury”.

Another new symbol, showing a human torso fractured from the inside indicates the chemical may cause long term health effects and applies to carcinogens and mutagens, respiratory sensitises and substances that are toxic for specific organs or can affect the human reproductive system.

The pictogram replaces the former skull and crossbones for the most serious long term hazards, such as those posed by lead or chrome oxides.

Acute toxicity, where chemicals could harm a worker after single exposure or multiple exposures in a few hours, will still be represented by a skull and crossbones in CLP’s new diamond configuration accompanied by the word “Danger”.

The CLP symbol for corrosive substances is essentially the same as the previous one, showing test tubes dropping the substance onto a hand or flat surface.

Explosive materials also retain a similar pictogram under CPL labelling, with a spherical object bursting apart. The two former risk phrases for risk or extreme risk of explosion “by shock, friction, fire or other sources of ignition” are replaced by seven hazard statements that should appear on labels, from “Unstable explosives” to “may mass explode in fire”.

Flammable gases, aerosols, liquids and solids have a similar pictogram to before – though the new version looks a little more like a stylised leaf – but is now accompanied by “Danger” for extremely flammable substances and “Warning” for less hazardous ones.

The symbol for oxidising liquids and solids, which give off oxygen easily and can accelerate combustion of other materials, remains a ring with a flame on top and will be accompanied by “Danger” for strong oxidises that can cause explosions and “warning” for weaker ones.

The final pictogram in the CLP classification is the lone symbol for environmental hazards, sharing the dead fish and blasted tree image of its predecessor. This symbol and its five accompanying hazard statements cover toxicity to the aquatic environment. Where the old orange symbol was also applied to chemicals that could damage the ozone layer, these will now be labelled with the exclamation mark pictogram and the signal word “warning”.

Full details of the new pictograms, their associated hazard classifications and statements and examples of how these are represented on SDSs can be found in the European commission guide chemicals at work – a New Labelling System, available at www.lexisurl.com/hsw93534