Top dangerous jobs in the UK 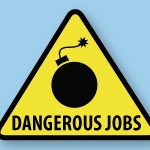 You thought you knew the top dangerous jobs in the UK, the list below may surprise you. Some jobs are more dangerous than others but we weren’t expecting a few of these.

The top most dangerous job comes as no surprise builders are putting themselves at risk everyday – 39 people died in the construction industry between 2012 and 2013, the majority of them by falling from a height.

This isn’t the most pleasant job to have, but being a refuse collector should also carry a health warning. 10 people died collecting, treating and disposing of waste between 2012 and 2013 according to the Health and Safety Executive‘s latest figures. The industry had a fatality rate of 7.8 per 100,000 employees in 2012/2013

Agriculture, forestry and fishing has the highest risk of all industrial sector, this sector accounts for an average of one in five fatal injuries. Out of the 29 workers fatally injured in 2012 / 2013 almost 50% were farmers, 17 % were hired hands in the industry. 5 of these were killed by animals, 5 more died by drowning or asphyxiation.

With only three deep pit coal mines left operational in the UK there is still a threat to miners on a daily basis. In 2012 / 2013 there were 2 fatalities and over 150 injuries in the mining and quarrying industry. As the industry has reduced in size, the fatality rate is now the highest in the country at 9.6 per 100,000 employees.

Although there was no fatal injuries in the retail industry between 2012 / 2013, there were 1619 “major injuries” in the sector with close to 7,000 injuries reported in total.

Education is reportedly the most injury prone sector with 1,736 people reporting non-fatal major injuries in 2012 / 2013, although there were no reported fatalities.

It might seem like an unlikely career for you to be at risk,  but HSE statistics say that 4 people died in the rental and leasing activities industry in 2012 / 2013, with 70 people suffering from major, but non-fatal, injuries.